BARROS AND HAWK TO DEFEND THEIR TITLE AT VANS BOWL-A-RAMA BONDI 2015!

Description: FSE Macbook 02:Users:FSE_MacBook_02:Desktop:Vans BOWLARAMA Bondi 2015.jpegLet’s turn it up to eleven! For the 11th year of Vans BOWL-A-RAMA™ Bondi we are taking everything to the next level with an overloaded week dedicated to celebrating art, music, film and true skateboard culture with the “Festival of the Skateboard” kicking off from February 17th, 2015 with the competition taking place Saturday, February 21st 2015.

Skateboarding’s most successful, influential and legendary skater; Tony Hawk will visit Sydney to defend his title against the rest of the world’s best skaters including Steve Caballero and current world Champion Pedro Barros to make Vans BOWL-A-RAMA™ Bondi the most iconic bowl skate competition there is.

"I’m stoked to return to Vans BOWL-A-RAMA Bondi and skate with all of the legends again. Bondi is by far one of the best contest venues we’ve ever had, and the skating is always next level" Says Tony Hawk.

Tony Hawk considered to be one of the most successful and influential pioneers of modern skateboarding will return to the shores of Bondi Beach to defend his title of Masters Champion against the likes of “Bones Brigade” legends Mike McGill, Steve Caballero, Nicky Guerrero and 2014 ISU Masters World Champion – Pat Ngoho, who are all regular competitors of Vans BOWL-A-RAMA™ Bondi.

“Vans are pleased once again to be supporting the longest running professional skateboard competition in Australia; Vans BOWL-A-RAMA Bondi. Vans have been dedicated to the action sports lifestyle since we started back in 1966. It is events like BOWL-A-RAMA that showcase the talent and the lifestyle that we all appreciate and that is why Vans has been a part of it for so many years. We look forward to it continuing for many years to come”. Ben Hapgood, Vans General Manager Australia.

In 2014 crowds of thousands gathered to celebrate the annual event’s 10th birthday and watch the world’s best skateboarders compete for a huge prize purse of AUD $81,500.

18 year-old Pedro Barros (BRA) blew judges away, winning the Vans BOWL-A-RAMA™ Bondi Pro Title and went on to be ISU Pro World Champion for the year, while the legendary Tony Hawk (USA) walked away with the revered Masters Title and Joshua Borden wowed crowds (and judges) taking out Red Bull best trick by performing an Andrecht to Fakie.

To ensure fans don’t miss a moment of the action, this year’s Vans BOWL-A-RAMA Bondi will have free sideshow access and all the activities happening in that area and free viewing of the big screen. All day single seat tickets will be available online from Monday 12th January at the Ticket Direct website – http://www.ticketdirect.com.au, for the affordable price of $20.00 for under 16s and pensioners, $30.00 for over 16s and special front row seats for $40.00.

Fans outside of Sydney, NSW can watch the action live via a global webcast from "http://www.bowlarama.com.au/live" kicking off from 11am!

“Every year I have to pinch myself that this is actually happening. The combination of the bowl, the beach, the festival, our friends in the stands and the world’s best skaters from across the generations just seems surreal. We are doing our 11th? Stoked is an understatement. The visionary support of Waverley Council, Vans, Destination NSW, The Beach Road Hotel, SDS, Red Bull, GoPro, Beach Burrito Company, International Skateboarder’s Union and the riders has ensured that we are able to not only put on a great competition but also promote and enjoy the awesome lifestyle of skateboarding in all its glory. Looking forward to celebrating with you all”. Frontside Events, Director; Chad Ford.

BOWL-A-RAMA™ was born on Bondi Beach – Sydney, Australia in 2005 and is the biggest professional concrete series in the World. With Wellington, Bondi, New York and the addition of Getxo, Spain, BOWL-A-RAMA can now call some of the most iconic destinations in the world home.

Vans BOWL-A-RAMA™ Bondi is proudly supported by the NSW Government through its tourism and major events agency, Destination NSW.

With ever-growing crowds and the consistent return of the world's best skateboarders, BOWL-A-RAMA© continues to confirm its reputation as the premier core skate series in the world. 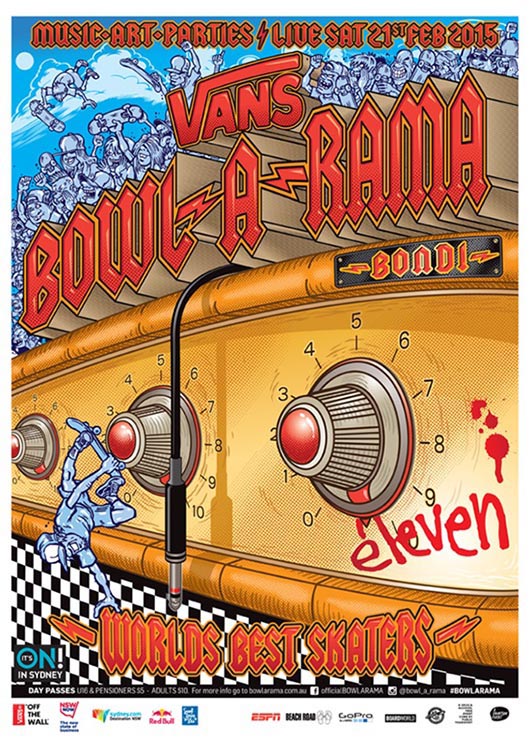